The Simpson Protocol is a tool that allows the client’s Conscious mind to relax and step aside so that their Superconscious (whatever that may be – but it seems to be – the most powerful mind of minds, that is also the most knowing) can work freely and completely -to the benefit of the Client’s optimum Good

I’m excited to be part of this fantastic convention – speaking at 1.00 am Saturday in the Quayside 2 Room (and then later enjoying the dinner – key part of the convention in my mind!!)

This technique represents a profound breakthrough in Hypnosis. It is already begun to revolutionize therapies to individualize them for each client by allowing each client’s Super-Conscious Mind to do the work. This is done by continuing to communicate with the Hypnotist while the client is in the deeper states, the client can do their own inner work with the direction of the Hypnotist to help them resolve whatever issue that is disturbing them.

Importantly, this takes the Hypnotist’s conscious mind out of the equation and allows the client’s own mental assets to do the evaluation and the change work from within. This is a much purer means of bringing about an accurate and correct change for the specific issue in each client and is client centered which empowers the client.

The key to Simpson Protocol is that the Hypnotist is able to communicate with their Client while they are in very deep states of Hypnosis (Esdaile for example) – thus accessing the most powerful parts of their mind – that always work for the Client’s ulitmate good.

The Clients do their own inner work with the direction of the Hypnotist to help them resolve whatever issue that is disturbing them.

There is no need for the Client to tell you the issue. Their mind knows the issue – and that is enough for the Simpson Protocl

This takes the Hypnotist’s conscious (and judgemental) mind out of the equation and allows the client’s own mental assets to do the evaluation and the change work from within. This is a much purer means of bringing about an accurate and correct change for the specific issue in each client and is client centered which empowers the client.

The Client’s own mind directs where and what will be worked on and does the work internally and privately when needed. This is a major benefit for many clients who don’t wish to expose their problems to anyone else due to privacy issues. 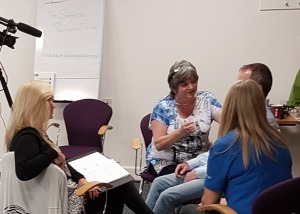 The Simpson Protocol 2 day Seminar
Here are some specific benefits of this class:

This two day seminar is intended to help Hypnotists learn how to attain and interact with the subconscious and Superconscious minds while in the Esdaile level (Hypnotic Coma) and beyond, and be able to use The Simpson Protocol the very next day in their own practice.

Since I began to use the Simpson Protocol things have changed drastically around my practice. The many elite High School aged athletes I have been working with have seen great breakthroughs. Many of them will simply hold back during Regression to Cause if an issue is rooted in shame or guilt.
The SP gives the client privacy and true freedom to do that important change work. The kids who held back with RTC, absolutely flourished with the SP. One of them coined the term for it ” silent healing”.
All of the adults ( 35 years old and up ) that have I have worked with using the SP have experienced their own version of the ”magic” that Ines describes in her piece above. The results have been nothing short of breathtaking for them. I have been witness to some powerful changes during these sessions.
I love that this modality is less hypnotist and more client oriented. Since control is such a hot button issue in this profession, the SP wonderfully reinforces to the client how much they truly are in control of everything about the session and the changes achieved.
The Simpson Protocol, unlike many of the RTC modalities out there is flexible, reliable compliant with two huge issues for most people ; Control and Emotional Privacy. It has been a ”game changer” for me.  Thanks for all your work Ines.

“I had gone over Dad’s stuff (Dave Elman) looking for items which would tie-in and support your talk… I sincerely meant what I said about Dad being glad of your research, and also of his comments in the book showing that AT THAT TIME the only practical uses were in surgery and child-birth. But later research we hope will develop it . . . apparently you and Ted are the later research to which he was referring.

It is a pity that Esdaile’s exact methods appear lost to history (or at least I know of no source for them). From 1840 to 1920, no intentional Esdaile States; the un-intentional usually put a stage hypnotist in jail and were much feared.
From 1920 to about 1955, knowledge of how to emerge, but no Esdaile-on-demand.
From 1955 to about 2005, Esdaile-on-Demand but no communication.
Then YOU.
Thank you.”

This website uses cookies to improve your experience while you navigate through the website. Out of these, the cookies that are categorized as necessary are stored on your browser as they are essential for the working of basic functionalities of the website. We also use third-party cookies that help us analyze and understand how you use this website. These cookies will be stored in your browser only with your consent. You also have the option to opt-out of these cookies. But opting out of some of these cookies may affect your browsing experience.
Necessary Always Enabled
Necessary cookies are absolutely essential for the website to function properly. This category only includes cookies that ensures basic functionalities and security features of the website. These cookies do not store any personal information.
Non-necessary
Any cookies that may not be particularly necessary for the website to function and is used specifically to collect user personal data via analytics, ads, other embedded contents are termed as non-necessary cookies. It is mandatory to procure user consent prior to running these cookies on your website.
SAVE & ACCEPT