The Simpson Protocol is a process that allows the client’s Conscious mind to relax and step aside so that the Superconscious can work freely and completely -to the benefit of the Client’s optimum outcome.

This takes the Hypnotist’s conscious mind out of the equation and allows the client’s own mental assets to do the evaluation and the change work from within. This is a much purer means of bringing about an accurate and correct change for the specific issue in each client and is client-centered which empowers the client.

SP is a complete Holistic approach to Hypnosis, allowing within the session the possibility of a complete change and outcome for the client, and giving them the emotional and mental foundation to move forward in life.

This Protocol also famously takes the hypnotists judgment completely out of the process – so  the clients ‘higher’ mind is free to produce the best and optimum outcomes for the client. The Hypnotist can create no harm, as the Clients ‘Higher” mind guides the process completely

THE THING always resides with the Client

Hypnosis helps you get to THE THING quickly and simply

The key to Simpson Protocol is that the Hypnotist is able to communicate with their Client while they are in very deep states of Hypnosis (Esdaile for example) – thus accessing the most powerful parts of their mind – that always work for the Client’s ultimate good.

Clients do their own inner work with the direction of the Hypnotist to help them resolve whatever issue that is disturbing them.

There is no need for the Client to tell you the issue. Their mind knows the issue – and that is enough for the Simpson Protocol

This takes the Hypnotist’s conscious (and judgemental) mind out of the equation and allows the client’s own mental assets to do the evaluation and the change work from within. This is a much purer means of bringing about an accurate and correct change for the specific issue in each client and is client centered which empowers the client.

The Client’s own mind directs where and what will be worked on and does the work internally and privately when needed. This is a major benefit for many clients who don’t wish to expose their problems to anyone else due to privacy issues.

When I went through the two-day training ( Simpson Protocol), I could not help but think of the person with whom I had just met and I began to look at how to help him through the lens of the Protocol. I especially liked that the client would not have to relive his experiences and have to tell me about what happened. The Simpson Protocol allows all of that work to happen within the mind of the person and so the emotional trauma can be buffered in a way that can’t be done through usual regression techniques, not to mention through traditional psychotherapy.

When I returned to the office and met with the person on a Friday, I used the Simpson Protocol right down to the letter, using her helpful manual. After our session, he wasn’t sure exactly what to make of what he experienced, but he reported that he somehow felt, “lighter” although he couldn’t explain it. I checked in with him the following Monday and he reported that he was not sure exactly what happened, but he attended a good friend’s party on Saturday and it was incredible in that he was relaxed and had fun (something he couldn’t do in recent years). Further, explained that he experienced none of the anxiety he had before and even the fear was gone. He didn’t think he could ever get back to the person he used to be, but there he was. He thanked my profusely and sincerely and I was so happy that I could help him thanks to the Simpson Protocol.

This technique represents a profound breakthrough in Hypnosis. It is already begun to revolutionize therapies to individualize them for each client by allowing each client’s Super-Conscious Mind to do the work. This is done by continuing to communicate with the Hypnotist while the client is in the deeper states, the client can do their own inner work with the direction of the Hypnotist to help them resolve whatever issue that is disturbing them. 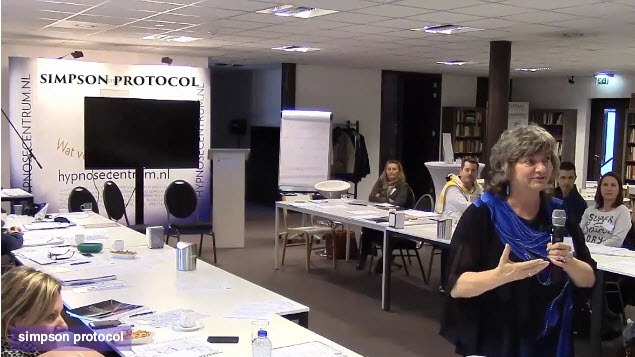 “I had gone over Dad’s stuff (Dave Elman) looking for items which would tie-in and support your talk… I sincerely meant what I said about Dad being glad of your research, and also of his comments in the book showing that AT THAT TIME the only practical uses were in surgery and child-birth. But later research we hope will develop it . . . apparently you are the later research to which he was referring.

It is a pity that Esdaile’s exact methods appear lost to history (or at least I know of no source for them). From 1840 to 1920, no intentional Esdaile States; the un-intentional usually put a stage hypnotist in jail and were much feared.
From 1920 to about 1955, knowledge of how to emerge, but no Esdaile-on-demand.
From 1955 to about 2005, Esdaile-on-Demand but no communication.
Then YOU.
Thank you.”

The Superconscious?  In SP it  seems to be, in practice it appears to be,  our available connection to something quite wonderful and omniscient that always will work towards our highest Good. Perhaps what is called the Super Mind or Collective Unconscious?